Imagine you’re getting ready to leave a busy restaurant after a long night out with friends. You’ve had a few too many and decide to call for a ride rather than to drive yourself. You pull out your smartphone and with a few taps a car is sent your way. When your car arrives, it looks like something out of a supercar magazine. Opening the passenger-side door, you discover that the vehicle that just pulled up is totally empty. Not just the passenger seat, but the driver’s seat as well.

This is the vision behind Zoox, a little-known Silicon Valley-based startup that is currently seeking a bumper round of funding that would value it at $1 billion before it has even picked up its first passenger.

So what makes Zoox so appealing to investors? For one, the popularity of ride sharing services like Uber and Lyft certainly helps. The one drawback to these services has long been local and state regulations over them. Ordinances were quickly introduced and passed in the spirit of defending Taxi services, as well as to ensure that drivers receive background checks that safeguard passengers from hitching a ride with someone that could have bad intentions.

Zoox takes the driver part of that concept away by creating an entirely autonomous fleet of cars that will drive to, pick up, and drop off passengers where they want to go. 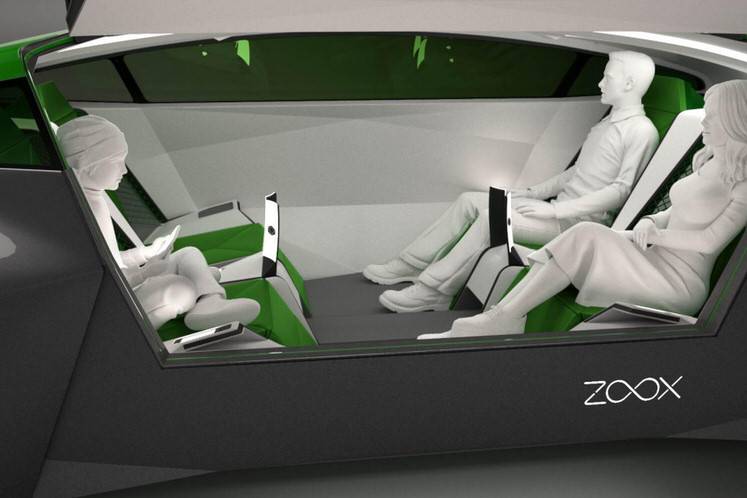 Creating a disruptive startup in the heavily-regulated auto industry is tough. Zoox has a concept vehicle that would make it not only a transportation company, but its unique vehicle concept means that it has to design and build a vehicle that passes regulatory controls to make it street legal.

The concept was originally unveiled two years ago as an ambitious design that was really not expected to see the light of day at a time when autonomous vehicles were still in their early infancy. The design featured a four-seat configuration with no steering wheel or manual controls. Seats were arranged so they faced each other, enabling passengers to have a more natural conversation while the vehicle takes them to their destination.

Zoox not the only ones at the cab stand

This ambitious undertaking requires a lot of funding. Unlike other autonomous vehicle projects, Zoox’s doesn’t borrow from already-existing designs. Google was able to test its self-driving technologies on existing vehicles that were converted. Another challenge for Zoox is competing in a market that includes top vehicle manufacturers and major brands like Tesla, BMW, Google, and potentially even Apple. Uber has made headlines as it uses the profits it’s making off its human-powered ride sharing service to purchase autonomous vehicles that may one day replace its drivers on the roadway.

Here’s one advantage Zoox already has in its corner. It is currently one of twelve companies that are licensed to operate autonomous vehicles in the state of California. Of those companies, Zoox stands apart as being a non-household name. There is another in the list, Cruise Automation, but it was purchased by General Motors this past March.

Indeed, Zoox has an uphill climb ahead of it, but if it can secure the $252 million it’s asking for in this funding round, it will be hard to ignore – even in the land of auto giants.